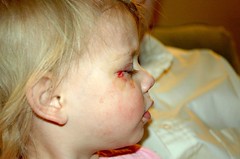 This afternoon Jessica was playing a game on a chair where she would go from standing to sitting in one big jump. Well, obviously this is a great idea. She lost her balance and fell face first into the coffee table.
She’s never cried like that before. I picked her up and started comforting her trying to get her to breathe but I thought she just hit her head, like usual. She falls alot. But then I saw blood, a lot of blood. Coming out of her eye. And nose.
I held it together pretty well but then I couldn’t get ahold of Aaron and finally called The Image Group and told them it was an emergency. By this time I had decided to take her to the E.R. We’ve never taken her to the E.R. for a fall before, but none of her falls have had this much blood, and she has never cried like that.
I lost it as soon as I heard Aaron’s voice. My baby, she’s hurt and I can’t fix it. There’s blood everywhere. She won’t let me touch it.
We met at the E.R. after I tried not to swear at the school bus in front of me the whole way there – by this time Jessica was pretty much acting like Jessica again but we still decided to get it checked out. I felt like that hypochondriac parent who takes her kid to the hospital when they scrape their knee. Although I had blood on my face and my sweater and hands and pretty much looked as tortured as Jessica’s eye.
The doctor said everything is fine – and we decided to try to tape it so it would heal better. Glue was an option but we would have run the risk of gluing her eye shut along with the cut and stitches were too painful to consider for the size of the cut. We had to restrain her for the doctor to get a look and trying to get the tape on her eye was like trying to stuff her back in my womb. She’s very strong … willed.
So instead the doctor gave us what we needed to tape her eye after she falls asleep tonight and my heart started beating again. She’s doing great.