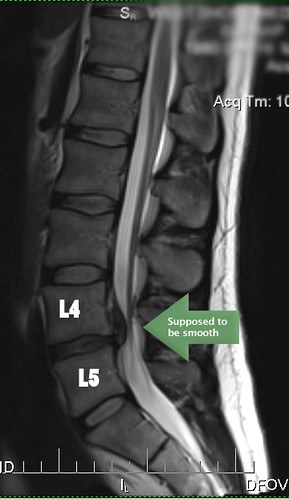 Ah yes. Where shall I start? So Aaron’s back is screwed up, no? Yea.

He often comes home with a sore back, some times it’s so bad that he can’t walk and after coming home on Friday the pain had intensified to proportions we’d never seen before. We’re currently undertaking a summer of exercise in the fashion of Boot Camp.

No, I’m not kidding.

Tuesday Aaron pushed himself to the max and then decided to suck it up and man it out on Thursday and pushed even harder, which lead to the Friday pain and the emergency Saturday morning adjustment from the chiropractor – which helped, mildly, for about 4 hours.

By this time we’re packed and on our way up north for a weekend away! OH MY WORD! VACATION! TIME WITHOUT THAT DAMN IPHONE!!! Only there’s service up there, and whatever, just shut up.

Well Saturday he was pretty helpless and I was a whiny baby about the whole ordeal because for the love of everything holy – can’t we get a freaking break? I would like to sit on my butt, thankyouverymuch – but now I’m taking care of two kids and a husband in pain – who at this time I thought just needed to suck it up. Men and pain don’t have a very wonderful track record in my book.

ANYWAY … He ends up sleeping while we all go on a boat ride and that was probably my 17th clue that I finally took seriously, albeit, still grumpy about the entire situation.

We get to sleep and he’s actually moving a bit, which to me, looks promising – I’m thinking by morning he’ll feel a bit better and we’ll be on the upswing.

I get woken up by the moaning of someone who I think, and this is not an exaggeration (I wish it was), is in labor. As in, we’re going to push and there are no drugs in my system labor.

I wake up my mom and her husband, Roger – who quickly gets ready and gets us to the hospital – we’re seen fairly soon once we get to the ER and things start moving along in the process of Q&A. The doctor comes in and notes that an MRI would be in our best interest just judging from the tests he ran on strength and whatnot – numbness, all that fun stuff.

And then he sees the little note on Aaron’s chart about his pain – Aaron rated it 11 out of 10.

Aaron finally got pain meds – a pain shot. No idea what was in it and neither one of us cared at that point – good LORD just make it stop already.

As you can see from the MRI scan – there’s a severe slipped disc between his L4 and L5 vertebrae and a piece of the L4 hs actually broken off and is migrating towards the nerves of the spinal cord. This, of course, was all told to us via a doctor and then they showed us the photo.

Throughout the entire ER visit the doctor on call was very upfront with us, mentioning early on the possible (but slight) need for surgery in cases like his. We put it out of the realm of “possible” until just before he left for his MRI.

We were just sitting there and all of sudden he says “I hope I don’t have to have surgery” and the lock came off my mouth and I started babbling about how I felt the same way, and I was just thinking that, and and and.

And this is when it happened, and it didn’t stop happening until after we were home, back in Holland – for about 3 hours. (Time frame from 10am to about 7pm)

All I could see, constantly replaying in my mind was Aaron on his stomach in the middle of the operating table and some stranger just cutting him, cutting him open and then touching his body, INSIDE his body – and missing with the scalpel. That’s all I saw. For hours.

I’m not a very worried person. I’m not prone to freak out easily or stew in advance on a situation for longer than about 10 seconds. This sensation of being so out of my mind helpless and worried and OH MY GOD HIS SPINE. Yup, it’s new for me.

I kept my cool, kept it inside until everything was packed from our vacation and we were in the car ready to go – my mom waves at me and my sunglasses go down – car goes into Drive and I lose it. I mean I lose it. My marbles are all over the floor of the car.

The ride home went well as far as pain goes for Aaron. He was given a second pain shot before we left and that really helped with the bumps and stops on the way home. They all fell asleep at one point which was nice for me, I could finally pick up a marble or two and then drop them all over again and I wasn’t worrying anyone in the process.

We picked up his pain meds but he’s so far gone with out them. This worries me just a little because I don’t really want to wake up to labor sounds again and then not be able to tame them with what we were given. But he’s a champ.

We’ll be meeting with a neurosurgeon on Tuesday and finding out more about the surgery aspect of this, and if it’s really the best option for us – the ER doc thought it would be, without doubt. So we’re going with that until we’re told differently.

I am very aware that this is not a terminal diagnosis. That all this is is a slipped disc that needs correcting. In realistic moments I can convince myself that this will be easy for the most part. He won’t have to learn how to walk all over again and he’s not losing his right arm or anything. Uh huh, I am well aware that my emotions went completely haywire all day today and that the thought of someone cutting my husband near his spine, although trained, really just freaks the beejesus out of me.

Aaron’s an important guy to me. One of THE most important guys in my life, to date. I’m not prepared to have that change in the physical sense and I’m going to let my hormones to continue to throw a hissy-fit until I know, damn well, that I get to hold his hand as we walk out of the next hospital.