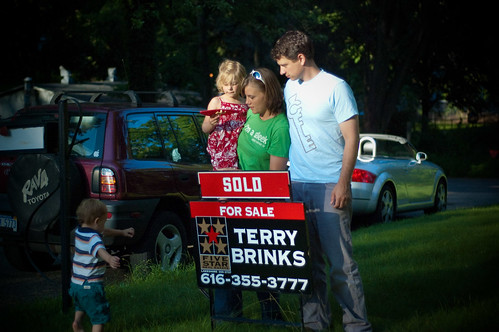 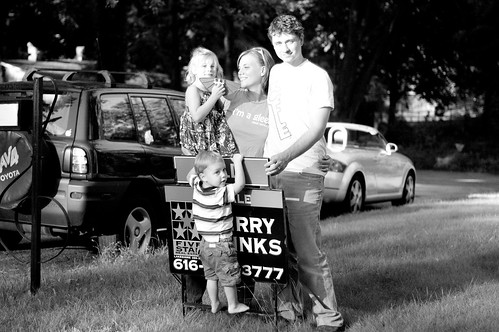 The address in which I’ve lived the longest we sold on July 16, 2010. We said goodbye before that and are now on an vacation from responsibility for a few months while we build a house.

I’ve got all kinds of emotions wrapped up in this. The house that we brought our children home to. I distinctly remember bringing a very new baby girl down to our basement after bringing her home from the hospital and feeling a gush of pride that this (THIS HOUSE!!) was all hers. She was born into this. This lucky little girl. It was hers because it was ours.

I felt that pride for almost 4 years and then it was time to leave. The pride in home ownership never went away but the feeling that we weren’t where we were supposed to be didn’t either.

We tried to sell on our own and when we finally came to terms with the market and what we really wanted for our family and for our life … we sold.

We finally did it.

I had a conversation with someone very close to me recently about the things they wanted in their life. Could you name them? Do you ever do something for you because it’s IN YOU to do them? Not for someone else. Not because it was said that you should, but that you WANT TO?

Selling this house would be one of mine.

Moving out of this house was another story. It was a process of boxes and trucks, helpful friends and family. We were surrounded with love the entire time but this was the last house my dad saw before he died. In a month he’ll have been gone for 6 years.

There were quite a few strings keeping me there. Wanting to hold on to this memory, that memory … him a little longer.

However, it was past due. It was time. I’m still working through letting go of most of that and I probably will be for some time. But here we are … for the first time in almost 7 years of marriage – 10 of being together – doing something on our own. Our very own. No parents helping, guiding. No relatives attached.

We landed on two feet, we’re gonna be OK. That feels fantastic.