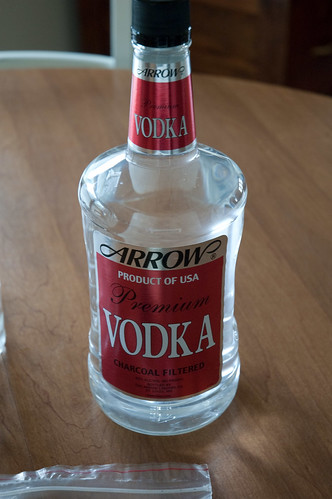 I had to pick up some booze from the grocery store in order to finally make some homemade vanilla and I had already run a couple errands that morning so I knew that just popping in and out of the store for this ONE thing would be OK. I wouldn’t be stretching the patience or my luck with 2 kids in tow.

Except, when did I ever think that my luck ran that far?

I was holding my son, two years old, through the store because my daughter, 5 years old, asked to push the smaller version of a grocery cart to which I said yes, she could.

Half way through the shopping trip my son decides that this set up is not fair and he loses his marbles. Literally kicking and screaming in my arms. The folks in the aisle infront of me stop, turn and watch as I pass with my five year old pushing a cart with the biggest bottle of vodka available and me holding my thrashing (and filthy) two year old in my arms.

There wasn’t blood. I hadn’t been hit or bit or scratched, so it wasn’t that bad right?? He did finally get his stuff together and we make it through the check out line.

He’s sniffling and I have to tell them both that, No, we are not going to be riding the Penny Horse today – I almost get out of the store (Vodka in hand) when I walk right into the exit door. Still holding my son.

Which means that I smacked his head into the exit door, while holding Vodka and trying to corral my daughter into following me more closely as to not run into traffic.

Which I stopped dead when he started screaming from the pain of getting his head smashed into a door. It was an accident!! And the vodka wasn’t for me (kind of) … I wasn’t going to be drinking when I got home (although, who wouldn’t have thought that after seeing me?).

People from a good 300 feet away turned around, stopped returning their carts or loading their groceries and watched me walk to my car with my vodka, filthy/hurt/screaming child and my daughter.

I got in my car after calming my son down and making sure he was ok and sat there.

I was in shock, stunned.

And then I called my mom.

I thought about taking a shot when I got home, don’t you worry, but I saved it for the vanilla.