This morning started unlike any other. Uncontrollable pain for me, no coffee in the house (not a bad thing), it’s Monday, no lunch packed for the child and no eggs in the house.

I simply packed my child up and gave her money for hot lunch, drank some tea, took some tylenol and planned to run to the store for some eggs. I was on top of this.

Aaron takes our daughter to school on the day’s she goes so they left while our son and I lingered over tea watching the trucks across the road work in the dirt and gravel … waiting for the tylenol to take effect.

When it finally did and after my son had asked for 37,891 snacks that I said yes to … we packed up and headed to the car to make a quick run to the store for those eggs.

Oh lovely. OH HOW LOVELY. The van, my Alice in Wonderland Minivan wouldn’t start. The van we’re currently discussing whether or not we should sell … this van would not start.

Wouldn’t even turn over.

I called Aaron because, obviously, even though he’s 35 miles away already and has a day full of meetings and a business to run … he has those boy parts that I do not which means he automatically knows what to do in all of these situations.

Call my Grandparents, he said. My Mom?

He didn’t know what to do. So we decided I should try to get a jump from another car and I hung up with him to call his Grandparents who were so willing to head on over after they finished breakfast. They even delivered our laundry.

We are seriously the luckiest people alive to have his Grandparents in our lives. No, really. They are amazing.

Grandpa brought his tools and jumper cables and we went to work on trying to start the van, which it would not. So Grandpa took the battery OUT of my van and then hooked the cables back up and at this point I’m thinking: This is my Monday. My child, without a coat or shoes in 33 degree weather, is riding around in the dirt on his “truck” while my Grandparents are working on my van and I’m just thinking that this can’t get any crazier, right?

Who starts a van without the battery in it?

We discuss the best plan of action and celebrate that it’s not my starter that was the problem. We pack up the tools, child and I’m given directions to NOT turn the car off and follow my Grandparents to the Auto Parts Store (the battery was placed back into my car) …

The adventure has just begun.

Come to find out that the battery isn’t dead, and the starter is fine – it’s the alternator. The very expensive alternator for a minivan – that’s broken. Or out, or not working. However you officially state that something is broken in the workings of a car engine. It was the alternator.

I have a point, I think. Somewhere along the line … it should be coming soon.

Phone calls were made and we finally found an auto body shop that could replace my alternator (not until Wednesday, mind you) but that I would also get a discount at because I’m a member of Moms in Tow.

Do you see how many dots it takes me to connect this picture together? Oh my word.

Pretty much, today has been fine. Nothing horrible happened and thank goodness we have an emergency fund that will take care of this without hurting our budget this month. (Although, we had to laugh that of course the week after we sit down and hammer out a budget TOGETHER and have a plan we both love that something like this would happen. Hi Murphy! You’re not welcome here. Go away.) 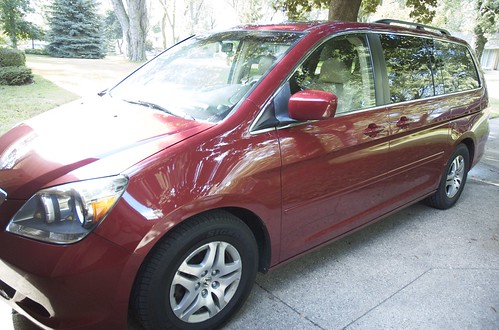 Those wonderful Grandparents are allowing us to borrow their own minivan for the day and I did finally go get those eggs. And those Pringles, m&m’s and cans and cans of mandarin oranges. They were on sale. And I was stressed.

Those eggs? I needed them to finish the meal and dessert I plan on bringing our pastor and family tonight as I had signed up to do so last week. They had a baby and I wanted to bring them dinner.

So I’m bringing them some dinner and probably 3 different kinds of dessert because after I got home I made a full pot of coffee and went to work on this, these and the carrot cake.

Then my boy fell asleep on the couch while watching The Crochet Corner on PBS.

And we turned the heat on this morning but now we don’t need it because the oven has been at 325 for the past 2 hours and my coffee is gone. It’s time for some water and more tylenol. Then I’ll pick up my daughter from school and start making dinner, which after all of this? Is Hamburger Helper.

**Got a call tonight, it’s NOT the alternator! Woo hoo!! Apparently the battery is – can’t hold a charge. So … yes, that is much better. Much more Awesome. And the van? You may still buy it. It will have a new battery.**

6 thoughts on “reflections on crazy”