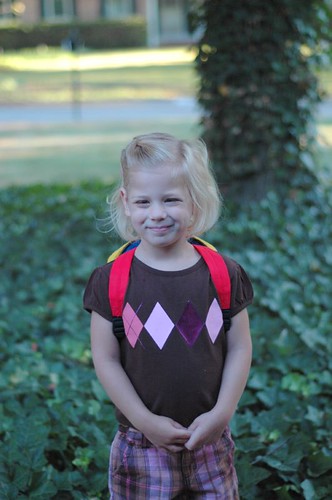 Here she is on her first day of preschool. We were a bleary-eyed family fresh off a summer of learning how to grow together after adding another child to our happy little trio, which became a quadruple (I know, that doesn’t really make sense … ) but still. It was a whirl wind of a summer and this huge! big! deal! of school came and we made a hoot and holler out of it.

Preschool wasn’t even 2 1/2 hours on the two mornings she went in a week, it was long enough for me to get home, set my alarm, feed the baby and fall asleep to catch my breath before she came home and I was “on” for the rest of the day. She needed it, too. Still talks about her teacher and what she learned that year (it was a Spanish immersion program) and she’s always been a social butterfly.

{This is a much longer story and not the one I was planning on originally telling here tonight.}

Aaron was homeschooled from 8th grade on and I was homeschooled my last year of school. Aaron’s story goes something like this: he was kicked out of the “traditional” school he attended and his parents were teachers and went to work on homeschooling. I’m paraphrasing to save time here, but that’s the gist of it. In his defense, and you’d have to know him, but it was a very bullshit move on the schools part to expel Aaron. That’s about all I know. A wrong was done and homeschooling was just what came of it.

My story goes like this: After finishing my sophomore year at my “traditional” school I saw what my schedule was looking like for the next one (I think it was early August and school started again the end of the month) and asked if I could take more classes in order to graduate early. I didn’t want to spend half my day in study halls or work programs, I wanted to graduate. Fast. One thing led to another and we went for the homeschooling option as a way for me to finish school early, start college and get one with my life already.

Side bar: Also, I wouldn’t admit it then but I’m pretty I pushed so hard for that to happen so I wouldn’t end up with a highschool boyfriend who was not what I needed in my future and definitely not what I wanted but somehow always ended up being the locker room story anyway. Those “wounds” have long-since healed but changing the course of my schooling is one of the very defining moments in my life – one of the first where I understood I was in charge of the outcome and I wanted a hand at playing the game of life, too.

So. Homeschooling. Will we? Would we? Should we?

More on this tomorrow. And why we’re looking at homeschooling as an option now.