This morning I was the parent helper in Oliver’s preschool, this happens once a month with a co-op preschool, and there are some months where I would rather gouge my eyes out than play gate-keeper with 17 three year olds.

Which has more to do with what I have going on (a to-do list that is SO important, gag) or needing that couple hours to recharge. But I power through and bring snack and read stories and, mostly?, I listen to them.

Have you ever had the privilege to sit in a room, crowded with miniature versions of people, who are just learning how to speak for themselves? Have you ever watched them interact or boss each other around, pretend firefighters and princess, bakers and police men. House and kitchen. Castles and alligators.

I came from a version of this. So did you. I never went to preschool and the Montessori debate wasn’t on my parents radar when I was 3. We had just moved back to the United States from Nigeria, Africa at that age – I was afraid of white people.

My version of a playground was a small patch of dirt at the back of our house, a bucket and a shovel. Mango trees, dirt roads, baboons.

Today I got to help Oliver’s classmates write their story. Or finish a sentence that I tried to make into a dialogue about what their future might hold. I didn’t lie to them with the easy phrase “You can be whatever you want!” because, although there’s truth in those words, a three-year old doesn’t want to reign in the possibilities of the world around him … they are the possibilities.

So instead of what do you want to do? You ask, who are you going to be? 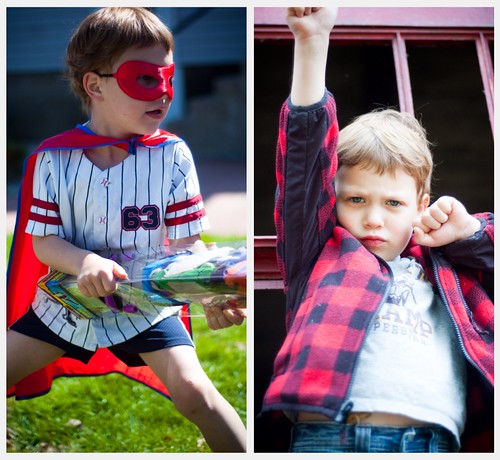 Oliver is going to be a firefighter who drives the truck with the big ladder. He’s going to spray water and also be Superman, he fly’s!

This is not at all surprising to me. The kid lives in a costume. Doesn’t matter what day it is, what the weather pretends to tell him about how to dress yourself, he has ideas. And head to toe? He is going to be that idea, in character, all day long.

He’ll narrate his day, often asking you to play along as he writes the script of our conversations. “Mom! When I say Boo, you say “oh no! I’m scared!”” and then we go through take 1, take 2, take 3 and so on until he’s satisfied with my performance.

Oliver is writing movies, he just doesn’t know it. He’s casting and designing sets. He’s role playing and often acting. His version of trying on dispositions like he would a t-shirt at the Gap.

Since he could hold onto objects he’s been studying them, when he finally had the dexterity to pincer grasp, he took them all apart. Oliver wants to know how to make things work. He has this amazing brain that can imagine something he doesn’t have, has never seen – and then he’ll build it. 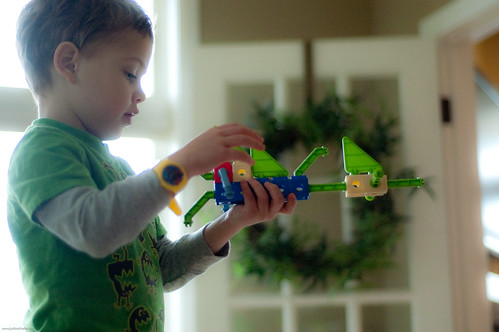 As a parent there’s a power we get too tired to express with our kids. Guidance. Opportunity. Especially when children multiply. Where once you had all the time in the world to discuss the theology behind unicorns and rainbows and web these amazing tales about where they went and how to catch them, now you have dinner to make. Now the laundry’s piling up. Now there’s something you have your own eye on, a career, a moment alone, a night out … and the magic of being a kid fades as just another phase.

You want to know what grows them up? What fosters their alliance with the unseen of childhood magic?

We do. Every day you say “not now”, with every answer that pacifies discomfort rather than eliminating danger.

Today was a great reminder to champion their personality. To ask the questions that will tell them we’re really listening.

My favorites from today:

Another little girl said she would like to drive a pink tractor. That this tractor will turn things around.

Another little girl wanted to make dresses with beautiful fabric and sell them in her PINK store.

A little boy wanted to be like dad! He was going to play video games! 😉

Another little boy wanted to be a ghost-catcher. He’ll use his flash light and trap them with his Scooby-doo gang.

Another little boy wanted to drive Monster Trucks! In the road, with everyone else. Because it’s safe.

There were a handful of nurses, firefighters, police men (I get to put people in jail!) and truck drivers or pilots.

Some of these were touching, others hilarious. They’re three. I’m pretty sure when I was three I wanted to be a mommy, which quickly turned into a Veterinarian. Then a teacher.

Basically I changed my mind a lot. But the main vein through all those years? I was writing books and illustrating them. I have books I wrote when I was 7 all about ducks. That’s what I did in my free time and I don’t think my parents really paid attention to it – but it quickly became more for me. I started journaling when I was 12 and I haven’t stopped writing since. Instead of illustrating books, now I illustrate my life.

So today, they want to be a hero. Oliver certainly is attracted to Superman and capes and the ability to save and fly and conquer … but his mind changes a lot, too. And while his mind is changing, he’s thinking and building and creating. He’s quiet and smart and happy.

Will I follow him down the path of firefighter today? Tomorrow? Absolutely. I’ll follow him through college and whatever profession he’s passionate about … but I’ll never forget his first job. The one that mattered more than any title he might pursue some day.

And an absolutely joyful one, at that. 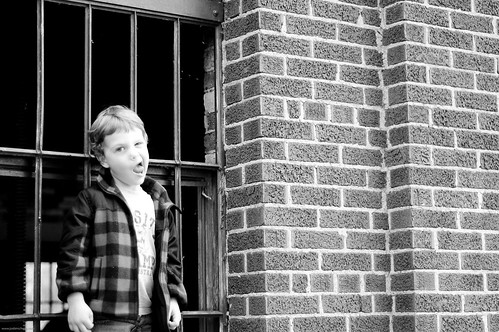