There, I said it. Now let’s discuss where babies come from. (Hint: your belly button isn’t even close.)

So I saw this really fun experiment on Pinterest – basically you stick an egg in vinegar for 24+ hours until the hard shell disinegrates and you’re left with an invisible egg of sorts. 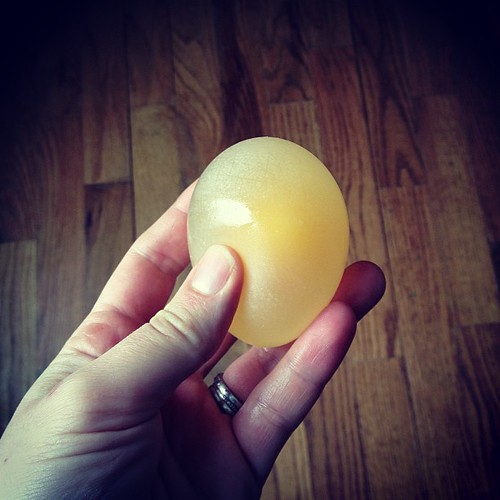 This blows my mind. Also – we eat a lot of eggs around here (like 4 to 6 dozen a week) so we’re well versed on how careful you need to be while handeling eggs. Aaron’s always pranking the kids (hear that as scaring the shit out them and the peeing his pants in joyful laughter) but I don’t usually get in on that action. I laugh too, it’s funny … but I don’t get pranked or do the pranking generally speaking.

I was feeling left out.

My big idea was to soak the egg then bounce it to the kids and have them oooh and aahhhhh at my brilliance. I show them how fucking awesome science is, they look at me like I’m magic. You see how this goes, right?

But then I bounced it too hard … I wanted to see how strong this egg really was and. Well. 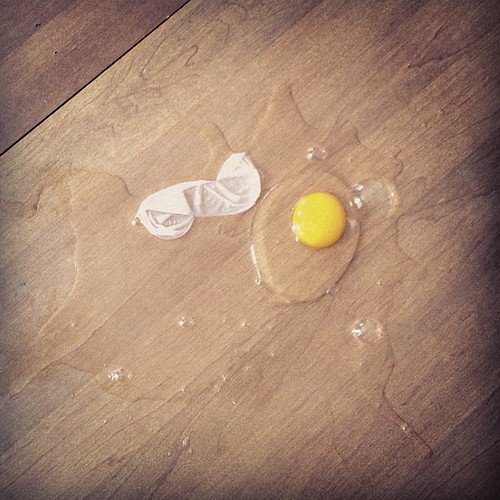 So listen, the protective shield on the egg looks a lot like a broken condom right there, now doesn’t it? You wanna know what happens when a condom breaks?

But the egg? See how it’s all exposed and unprotected? It’s vulnerable, easily penetrated by, oh I don’t know, sperm? I mean, bunnies? Nope. I meant sperm.

What’s a sperm? So ok, remember learning about the life cycle of frogs? In the beginning they’re little tadpoles? Well, it’s not that – don’t get grossed out. But it’s a microscopic version of that. Only way cooler. Like – half the recipe to a human being – cool. Also, sorta disgusting, go ask your father.

And when a sperm joins an egg (it’s a party, I promise) you conceive. Conceive means (and I’m paraphrasing here) HOLY SHIT YOU’RE GONNA HAVE A BABY.

Those are the facts, accidentally illustrated by my science experiment. Moral of the story, kids? Do not dip your toes in the vinegar. We can talk about what that means when you’re thirty.

My notes: In all seriousness, this was a hilarious accident. Perfect in a way – because most of us don’t talk about our accidents. We’re ashamed of them, they color our value and worth. It’s not fun or exciting when it feels so dirty. I want my kids to have sex, you better believe it. I want them to like it and be respected and respect themselves. I do honestly believe that sex is best left to one partner, hopefully after marriage. God had that one right, but so many of us get that one wrong. And it doesn’t make us “less than”. There are risks involved (huge, enormous risks) and there are consequences (huge, enormous consequences) so be careful. Be very careful. And wait. Wait longer than you think you want to, always wait longer than you can stand. Wait.

Keep that egg in it’s shell. Just carry it around all perfect and round and white for as long as you can. And then carry it a little longer. When you do finally get to break it open and have that party – it’s going to be awesome. You’ll be making a huge decision. It should be YOUR decision. Not mine, or someone else’s. But I ain’t gonna love you any less if that decision comes before I’m ready for it (See also: this is not a free pass to get married at 19). I fully believe that as the conductor of your own self, you’ll know. And I trust you. I trust you to trust yourself, to listen to your bodies. To heed caution and warning and volatile emotional circumstances. I trust you.

But first, let me give you all the facts, first just listen.

5 thoughts on “The birds and the bees. Except not really.”