It took a good 3 days to actually get to Spain. By that I mean, it took 3 days to get here. It was exhausting. I’m going to bullet point this update because there is just so much to tell you. First though: farmers market? Half check. Indoor market? Think Downtown Market in Grand Rapids, Mi only busier and everyone drinks. Outside, inside. On the steps. They smoke, too. It’s one big party that we have no idea what anyone is telling us. I understand Spanish well enough and can eek by with phrases and single words as needed. Listening to them speak is like seeing an army of tongues perform a sonnet. It’s fluid with a staccato of immediacy and passion. Their voice inflections give it all away. 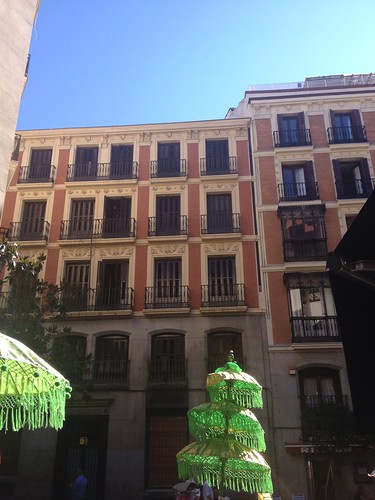 Quickly: for photos you’ll want to keep checking Flickr – when we connect to wifi I’m able to push our current photos live. I’ll try to keep this up.

Arriving in Madrid was difficult. Our original itinerary had us arriving in Madrid at 7:05 am on September 20th. Leaving Grand Rapids at 2pm on the 19th. We had a connecting flight in Chicago, which was a straight flight to Madrid. Easy as pie!

Except: The Gerald R Ford Airport does not believe in other people’s dreams. Instead they prefer to chew them up and spit them out at the ticket counter of America Airlines while they single-finger-type, in no hurry at all, to rearrange your entire itinerary. They did smile, though. And actually – were very helpful. We decided to drive to Chicago and catch a later flight to London, then another flight to Madrid – getting us here at about 11 am on the 20th.

We had been at this traveling this since 10 am on the 19th – everything was going to be ok. We’d get there! Out of GR, not so much – as they couldn’t get us to a connecting flight until Sunday. Either way, we had a better chance at flying if we could get to Chicago. 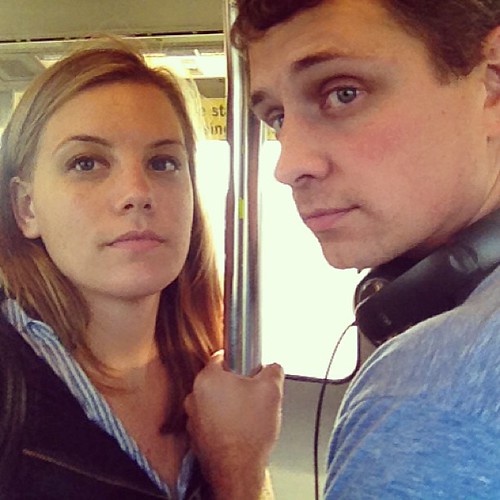 Our flight out of O’hare left at 6:05, was delayed to 6:25 and we arrived at 5:47. They wouldn’t let us rush through security or check a bag. SOS. We missed that flight, stood in line, and sat through an other single-finger-typing session while they tried to get us out of Chicago and to Madrid. 30 minutes of silence and tap-tap-tap-ENTER later the gentelman behind the counter with ALL THE POWER asked us how we felt about Munich? VERY GOOD, SIR THANKYOUSOMUCHOHMYGOSH. 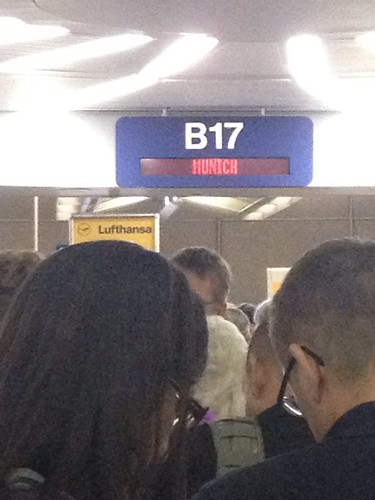 I think we left at 8:45 but were delayed on the runway so maybe closer to 10pm? We were due to arrive in Munich (Munech as they spell it, those silly Germans) at Noonish. On our clock, it was 2 am, everyone was drinking beer and we were all “EGGS! COFFEE!” so we had yogurt and “hot coffee” because cafe is espresso and espresso is espresso and milk coffee is just hot milk. “Hot coffee” is a cup of coffee, yespleasegiveittomeinmyveins. We sort of slept on the plan, but we REALLY slept on our next plane. From Munich to Madrid. We also ate, me for the first time, and saw land outside the airplane windows. 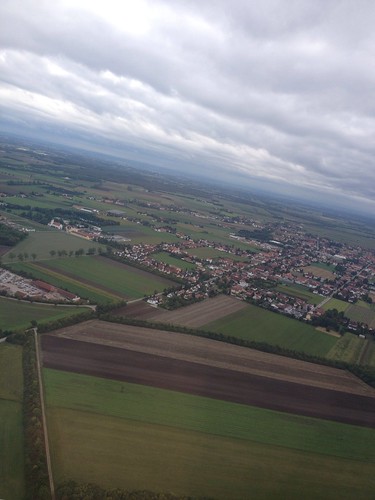 Anyway. We landed and went straight to the electronics store to buy new sim cards for our phones. Rushed to “hole 6” to grab our luggage, which was the last and lonely bag just taking on a ride on the belt, over and over again. We realized that no one speaks English. Not even hopeful, help me find this English. And we were exhausted.

It was daylight – we landed around 6pm on the 20th. Promptly got to our hotel and took showers then fell asleep for a few hours. I’ve never loved a nap more in my life. 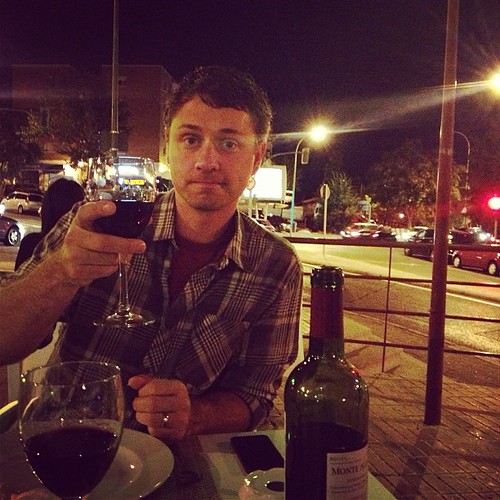 We walked to find dinner, everything was dark. It was about 10pm and the first place we chose to eat was delicious – but Asian. Because of course you fly half way around the world to eat Asian Tapas. I know I did.

Now for the bullet point memories:

Google Translate is fun but awkward in a restaurant. “Is coffee included with our meal or extra?”

Pointing and ordering food turns out quite nice. You’re forced to try something new, everything’s delicious.

Dinner, which is tapas generally, is a set price per person. The drink is included. We got a 3 course meal, bottle of wine and coffee for 23 Euros. Tipping is not expected, not even offered on receipt transactions.

Every time you sit at a restaurant – you just delegated the next 2 or 3 hours to eating and drinking. And talking to the birds.

Aaron and I have a lot to say to each other, which is nice. 😉

The sangria here? All it’s chalked up to be.

They don’t offer breakfast, they offer chocolate in the morning. And the “wee hours”.

We slept til noon, which was also check out time at the first hotel. We could have kept sleeping (see above for “exhaustion”).

We stick out like tourists who don’t speak their language. This helps actually because they assume we’re stupid travelers and just start talking to us in English. Trouble is – its mostly the street performers who do this. So they want us to pay them for a conversation. It’s flattering though, they all start out with how lovely I am. Then they tell Aaron he’s OK, too. Ha!

It’s beautiful, we’re near the Plaza de Mayo – and it’s nice but very touristy. So we ventured out and found Plaza de San Miguel and it’s Mercado (Market). I had Sangria before coffee, or anything to eat at all actually. Then I ate fried fish. And drank a mojito. “Coffee” in Madrid is straight up espresso. You can ask for it “long” which means basically, a double espresso. We’ll have to figure out how to get an actual cup of coffee. And they don’t offer “to-go” it’s “take away” but not things like coffee. Stupid Americans. Would you sit down and stay awhile?

Wine on the other hand? Yes, that you can “take-away” and walk the streets with. I guess you return the glass? Or why bother? You’ll just refill it somewhere else. 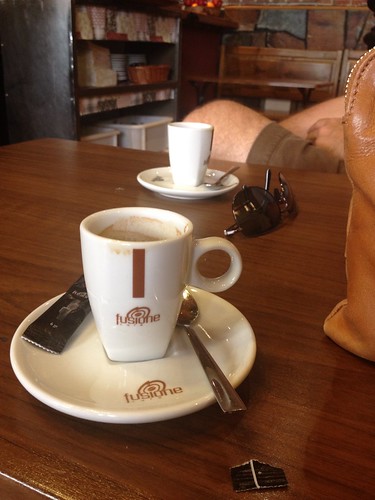 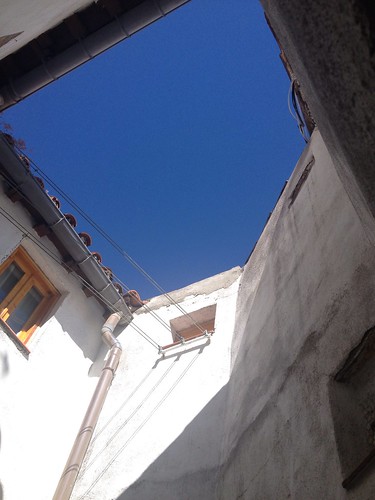 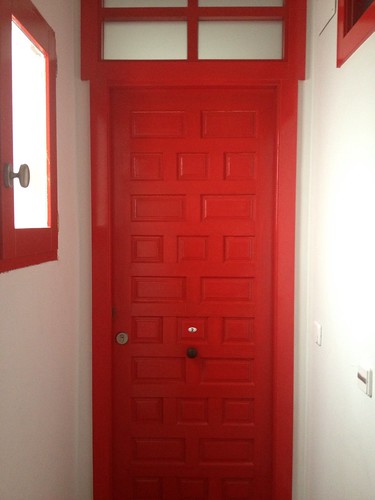 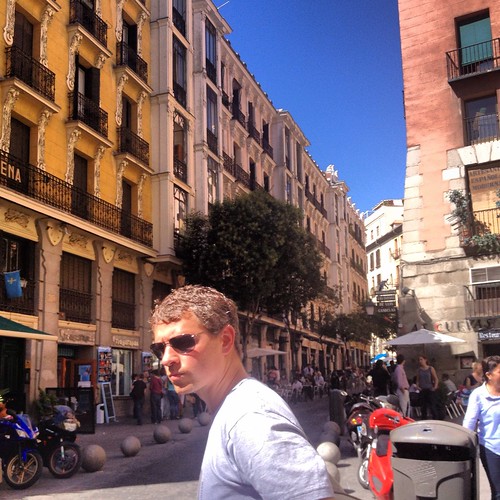 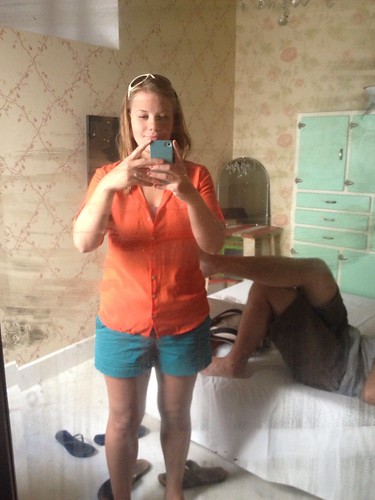