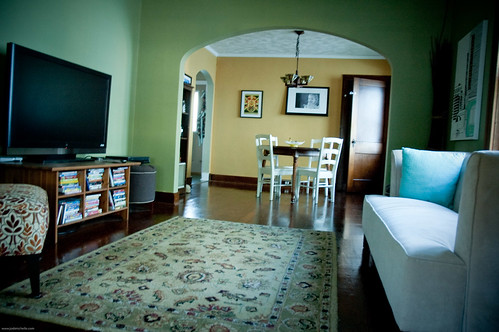 I’ve been getting some emails about our journey to debt freedom and our living situation.

This timeline is the actual progression of things over the last 15 months (I say 15 months because the sale of our home was a few month progression to offer/agreement/closing).

Looking back would I do it all over again?

However I would do a few things differently. Perhaps instead of finding an interim apartment (originally for 4 months while the house we were building was completed) I’d find something I was comfortable being in long-term. If there’s one thing we’ve proven the past year it’s that Anything Can Happen.

I’d probably save myself a lot of heartache and just not try to buy another house, no matter how ON SALE it is, for a good year. Anything Can Happen, Yes – but we don’t always have to be rushing to the next hitching post.

We could have paid off our car instead of trying to buy the first house that didn’t work out. We stalled and waited and then tried to buy ANOTHER house.

We were knocking out our debt but we could have been here 4 months faster if we just stopped and followed through. Ever since we got married it feels like we’ve been on a fast track to better. Better what? I couldn’t even tell you. I had this image of what life was supposed to be like, unfortunately it mirrored the image of where my parents were at age 50 – successful in their careers, no mortgages or payments … who could easily go on vacation or spend thousands on a purchase with a check … because they worked hard, saved and built their financial security with diligence. Not frivolous risks.

We were poor when I was younger but I never knew it. We didn’t live poorly even though we couldn’t afford things. And really, I didn’t know any different.

I love getting emails from readers who say I’ve inspired them to work hard at their own debt-free plans or just to change one small thing about money in their lives. I love having these conversations: I love money. But not in an idyllic sort of way. I’m enamored with the math of it.

We’re still on a path to building a future and we’re doing well. I’ve had to confront my expectations on this issue so often. Life isn’t a rear view mirror.

We’ve come so far in such a short amount of time (read about it here) that I have this idea that we’ll get to the end EVEN FASTER!

When really – I don’t ever want to get to the end. How boring does that sound? I want to get to a place where I feel like there isn’t an end coming. You know? And that’s not financially. Just in general. I’d like to find a place to be present in my today and willing to cope with my tomorrows.

So! I’m a geeky numbers gal who loves a budget and a savings plan. Compounding interest is by far the most fun thing to play with. Ever.

The math geek in me jumps around at that equation. COME ON! It’s stupid not to think like that. $200 a month? For most people that’s less than only one of their car payments. Not even a months worth of groceries. Day care? $200 a month isn’t hard to find when you look for it.

Ok, one more thing and then we can move on. And we are moving on!! I have stuff to show you!

I’m not a couponer and have a decent grocery budget – we eat out often, pay for a babysitter weekly (or more) and enjoy dating each other. Our entertainment budget is large. I have no qualms about it. But I make up for it in other areas:

Literally, I don’t shop. I do not go shopping. Groceries it is for me! The occasional pair of shoes for the kids or thrifting for a need (shorts, jeans) but for myself – for the house? I have patience. I don’t impulse buy, and I used to all the time.

I browse the aisle of the side of the road, behind industrial shipping agencies and yes, have dumpster dived behind popular retailers. Craigslist is my favorite “box store” because what can’t you get there?

When I do buy new I price shop first but don’t feel bad when I find out I haven’t gotten the best deal on the item. Gas costs money too. I DIY everything I can and I allow myself to make mistakes and try again. It’s still less costly than quickly filling a “need” which usually ends up to be a “want”.

Your turn:
If you were going to change one thing about your life – financial or not – what would it be?

I just put a bunch of stuff for sale and I have people asking me WHY we’re selling our stuff. Including Aaron, but he’s well aware, he’s just pointing out that I like to do this. I love to sell our stuff.

And maybe this comes at a good time because I know so many people are making lists, checking them twice and waking up at ungodly hours to risk being run over for a sale.

This doesn’t appeal to me, surprising huh?

I’ve made no secret about the fact that I love Dave Ramsey and we’re in the Financial Peace University course right now – but I’ve just met the first person who admits to not liking him. Actually, quite the opposite, and it threw me – I’m not going to lie. I didn’t understand why someone would feel such strong feelings AGAINST a guy who’s doing so much GOOD … but their opinion didn’t match up with mine.

It was a great conversation actually. I walked away looking to dig deeper into a few different things, which I did and after all of that – I still agree with Dave.

Call me crazy, it really doesn’t bother me. I’ll call myself crazy, weird, not normal … all those things and that’s fine. I can take it.

I think it’s important to research and do your homework, especially when it comes to your own money – but I have no problem whatsoever sticking on Dave’s team and batting an average score of freedom and wealth.

So yes, we’re selling some crap. Possessions. They’re things. If we some day have more square footage, then of course we’ll purchase and re-amass items, I just don’t subscribe to the rule of thumb that says we should pay someone else to keep them for us (storage unit, which we have) when at the end of a year, maybe two, we’ll have paid enough OUT that we could have already replaced a few of the items. Not all of them. But still.

Green is so much prettier than red.

By all means though, this is something I LOVE to talk about – so stir the pot. I want to know your opinions. Why NOT listen to some of Dave’s teaching? Why NOT be debt free and pay cash for everything? Why NOT have my income work for me instead of working for my income?

Most of what we’re selling are items we planned to sell after moving into the new home any way – we were looking to update or change our style and were saving to do so. Now that we’re not moving we’d like to make this apartment a little more comfortable – less “stuff” sitting around because we have it and make the space really work for the way our family lives inside of it.

Bunk beds for the kids – who share a room.
Smaller couch (only half our sectional fits in our space now) and better seating for our active family.
New bed for us (our mattress is due for an update).

In order to do that, selling the current items is imminent. We don’t have spare bedrooms (or even space in the storage unit) to save the leftovers. So, away they go.

Anyone in the market for a couch, crib, car, chairs or coffee tables???